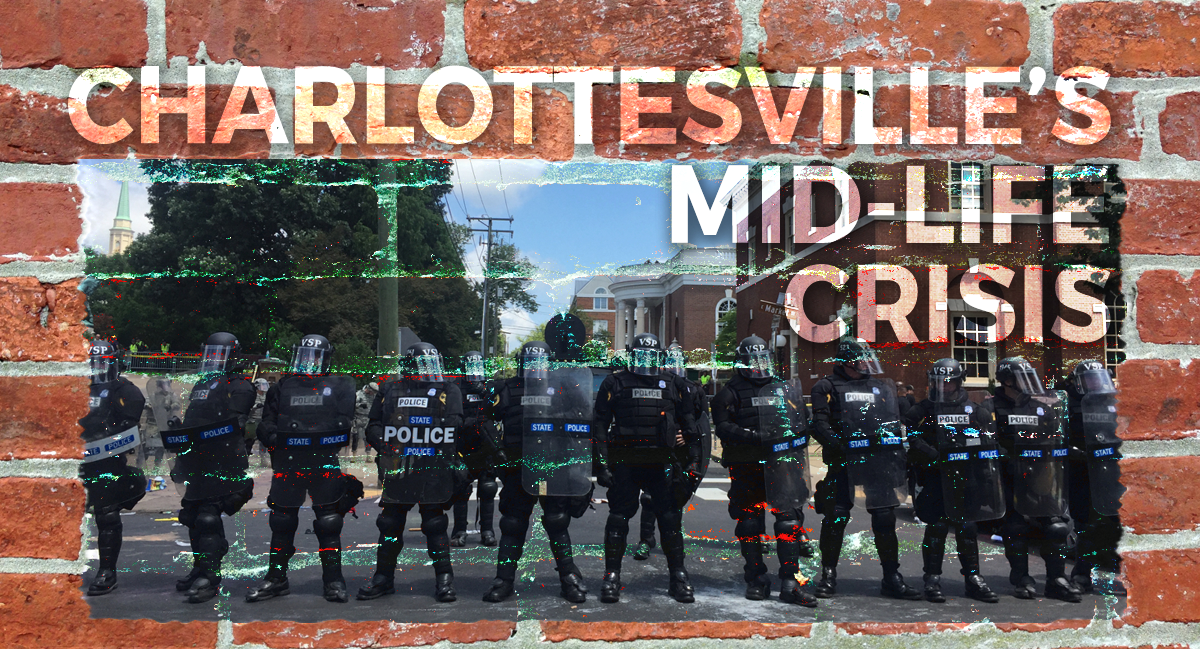 The mid-life crisis of my little city of Charlottesville, Virginia, has taken a turn for the worse. At Saturday’s Alt-Right Rally we lost 3 lives. One hit by what appears to be a madman in a vehicle, who also injured a number of others in his moment of rage, and two Virginia State Troopers who died when their helicopter crashed into the earth.

Following last month’s KKK rally here in Charlottesville, which I also wrote about, the city began to brace itself for this version of the racial hornets’ nest. After seeing and hearing the bubbling hatred from both sides at the KKK rally I expected something similarly disappointing yesterday, and let’s just say that unfortunately, the Alt-Right rally exceeded my expectations.

As a filmmaker and a documentarian I approach events like these from a very different viewpoint than most who attend. I try my best to be like a fly on the wall, pointing my camera in the direction of the most interesting action in front of me and capturing what it sees—the good, the bad, and the ugly. I don’t currently have a plan to make a film or even a short video from the material I’ve captured, but I realize the significance of these events and so I feel almost obligated to be there to be the eyes and ears of those who can’t, those who choose not to attend, and for future generations. This is a part of how I serve both my community and my society.

That’s what I was doing at the Alt-Right Rally when I was punched three times in the face by one of those “peaceful counter-protestors” you’ve probably heard so much about. Fortunately for me, she was the 5 foot, 92 pound variety of counter-protestor and not the 6 foot, 300 pound version. Besides knocking off my glasses and roughing up my lip a bit, I’m no worse for the wear. This occurred early at the rally when I was attempting to film something that she and a few of her friends didn’t want filmed. That’s when she started throwing her punches. What was I trying to capture with my camera when this occurred? A couple of counter-protestors had been pepper-sprayed and were receiving aid. I was trying to document people helping their fellow man when I became the victim of her fury and rage. It’s crazy what will set people off when they are so on edge at a rally like this. I guess in some way it’s probably easier to punch a middle-aged member of the media with a 20 pound camera on his shoulder than it is to punch one of the young, angry, racist, alt-right members with pepper spray in his hand. Unfortunately, the greatest harm she did was to my camera. She grabbed a cable and yanked it with both hands which ripped it in half and left my viewfinder inoperable for the remainder of the day. Imagine trying to document an event like this without being able to see what your filming.

The hatred I saw at the Alt-Right rally flows in both directions. The hatred of white supremacists is it’s own ugly breed of hate. It’s a type of evil that must consume it’s carrier like a cancer, eating away at any good healthy cells that remain. In many ways, it’s easier to diagnose than it is to cure, but at least it’s diagnosable. We can label it, call it what it is, and weep for the victims it claims. Or, as I witnessed at the rally, we can label it as racism, call it what it is, and then become consumed with hatred toward the person who caught the disease. Now the hatred I saw from the counter-protestors is not nearly as easy to label, define, or diagnose. This makes their version of hatred more complex and perhaps more insidious. I fully believe in the idea of a “righteous anger” where the ideas of racism and white supremacy can anger us to the point of action. But our actions are very telling. If we examine them carefully, our actions can let us know if we crossed the line from “righteous anger” into pure hatred—which is what I witnessed at the rally in Charlottesville.

One benefit of a rally of hate like this is that the hatred from both sides is evident and on display. I consider this a benefit, because it’s good to be able to look into someone’s eyes and know what they hate. It’s very revealing. The concern, of course—the danger—is the harsh reality that when the rally is over, and the outfits, gas masks, and flags are all put away, these people just blend right back into the society around us. They go to work with us. They eat at restaurants at the next table over. They walk our streets. And although their wardrobe and signs might be back in their closets, the hatred they have for their cause is still in their hearts.

There was a lot of violence yesterday which made it very different from the KKK rally last month. And as I examine the two events in my mind I think much of yesterday’s chaos could have been avoided with one simple addition to the layout at the park; the media moat. At the KKK rally there were two sets of barriers between the KKK members and the counter-protestors. This double-fence (provided by the City) gave a gap of ten or twelve feet between the anger of each side. This “moat” was only accessible by members of the press. I could point my camera in either direction and capture the rally and the counter-protest. Yesterday at Lee Park there was no media moat provided. This put members of the media right into the midst of the melee where they could get punched in the face. The Alt-Right Rally had more participants than the KKK rally did which may have made the moat harder to establish, but I really believe that if the city of Charlottesville had provided a media moat that the violence between the two groups could have been stemmed.

Perhaps one of the overlooked consequences from yesterday’s event was what I call the “hijacking of statue protection”. For those who may not be aware, both the KKK rally and the Alt-Right rally stem from a decision that Charlottesville City Council made to remove two confederate statues from two public parks. The park where yesterday’s rally occurred contains the statue of General Robert E. Lee and the park where the KKK gathered has a statue of Stonewall Jackson. Charlottesville has a good number of level-headed non-racists, including some black friends of mine, who don’t want the statues removed from the parks. But I’m afraid yesterday’s events will make it much harder for their voices to be heard. Why? Because now it will be very easy for the left to equate “statue protectors” with “racist, white-supremacists”. I can hear it now, “Oh, you’re one of them. How dare you want to keep the statues. Why don’t you take your racist, hate-filled ideas and leave this town?” I’m guessing after yesterday, it will be a bit easier for those who want the statues removed to hate those good citizens who want to keep them. May our potentially misguided assumptions of others not foster division among the good, well-meaning people of this city. 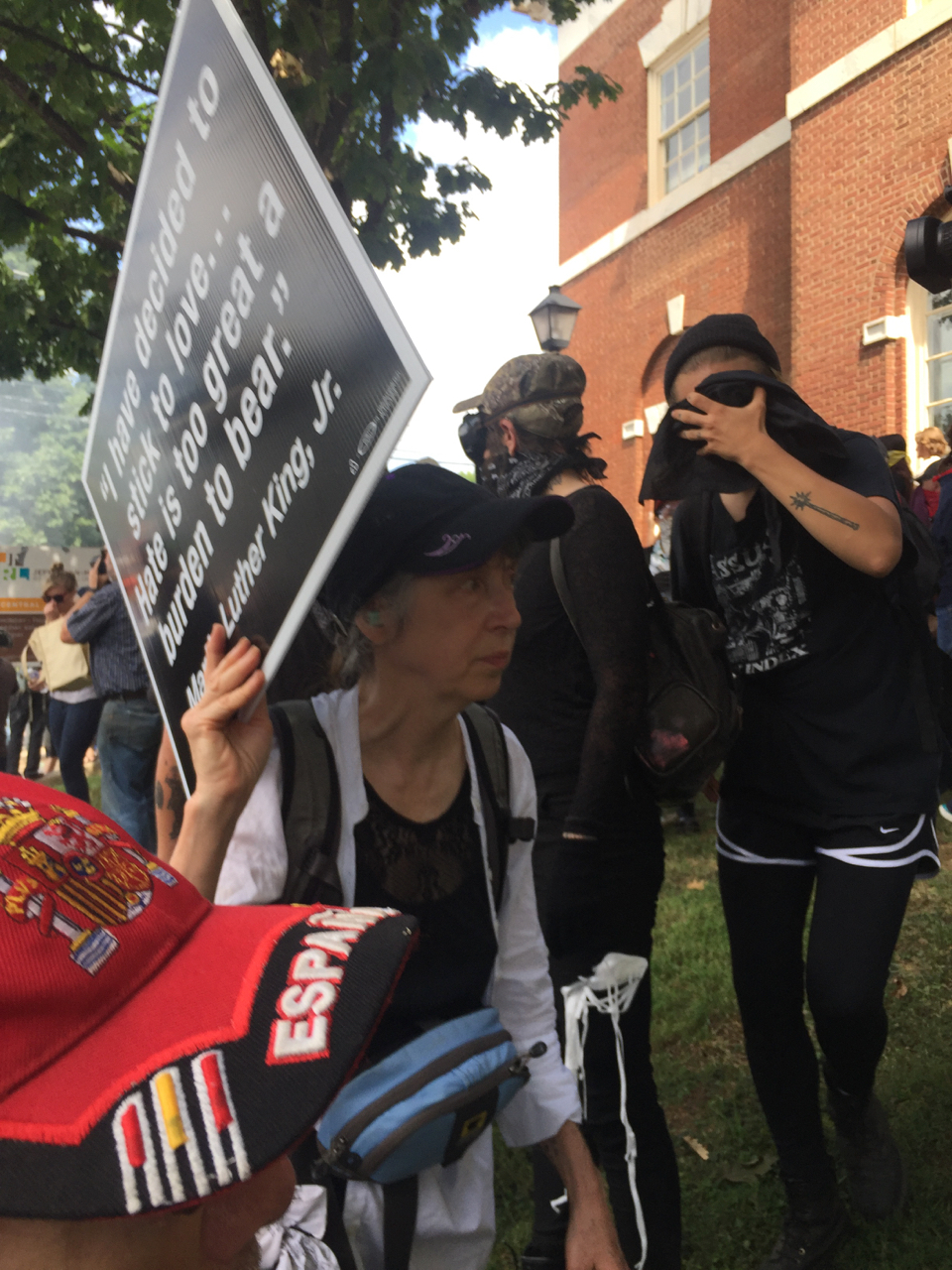 Which brings me to the Reverend Martin Luther King,Jr. One of my favorite quotes of his is this… “I have decided to stick with love. Hate is too great a burden to bear.” I don’t know how we do it, but I believe that love is a better response to the evils of racism than hatred can ever be. We must find ways of living out this type of love in our communities. Every time we are called names, or spit on, or punched in the face, we must… we must retaliate with love. Hatred breeds only more hatred, but a righteous anger can lead us to love and I truly believe that love conquers all.

As the events were winding down yesterday around Lee Park, I was walking the streets thanking individual police officers and members of the National Guard for doing their jobs. I looked down in the gutter along Market Street and saw the most profound sight of the day. Laying there among the trash was a plastic bronze eagle, the type that would adorn the tip of a flag, perhaps the flag of one of the racists at the rally, perhaps. But what made it profound was that the head of the eagle was tucked under a discarded face mask that someone had used to protect themselves from pepper spray. A bronze eagle that represents America’s freedom, made out of plastic (probably in China), lying discarded in a gutter trying to breathe through a face mask. I stared at it for a moment and then I knelt down and picked it, tucked it securely into my pocket, and walked away. 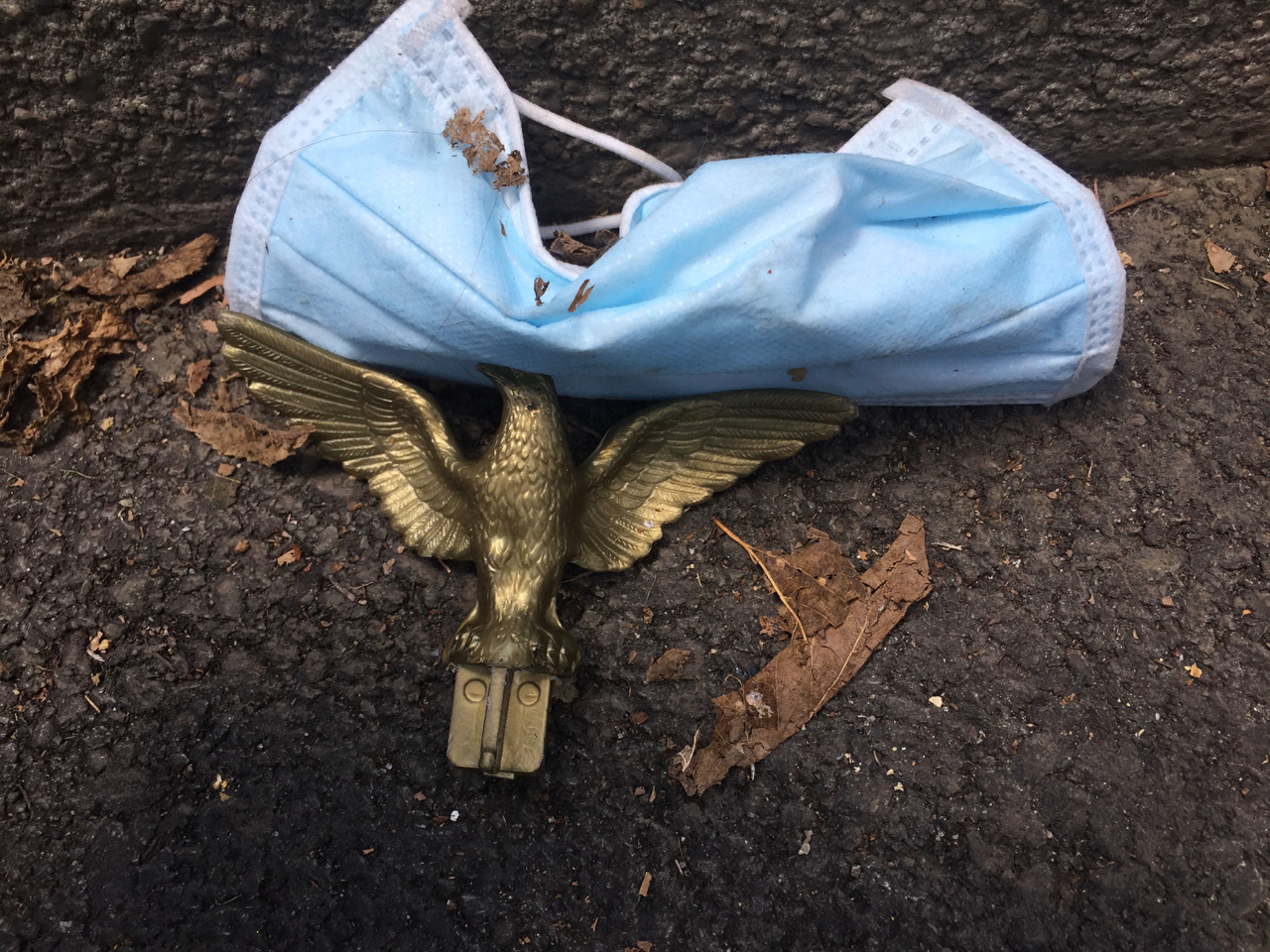 UPDATED: 3:20pm, August 13, 2017 — This article was updated to adjust event timing to “yesterday” where one instance originally said “today” and to include the following paragraph which was omitted in the original…  “One benefit of a rally of hate like this is that the hatred from both sides is evident and on display. I consider this a benefit, because it’s good to be able to look into someone’s eyes and know what they hate. It’s very revealing. The concern, of course—the danger—is the harsh reality that when the rally is over, and the outfits, gas masks, and flags are all put away, these people just blend right back into the society around us. They go to work with us. They eat at restaurants at the next table over. The walk our streets. And although their wardrobe and signs might be back in their closets, the hatred they have for their cause is still in their hearts.”