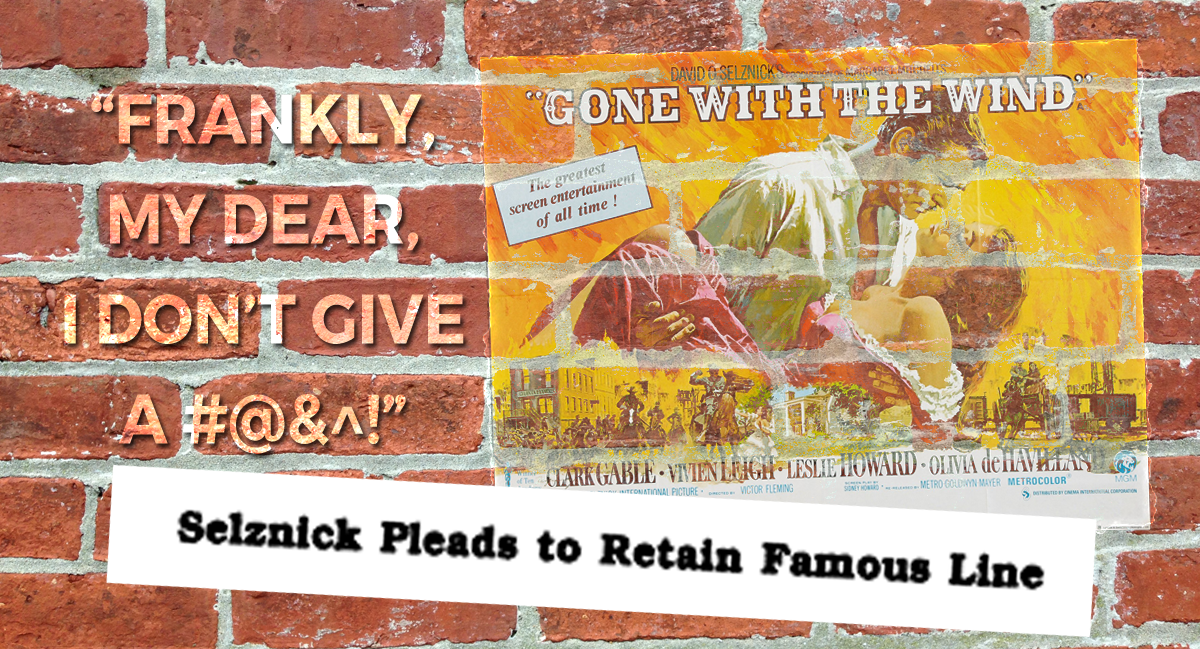 WARNING: This post contains a few words some readers may find offensive!

Motion Pictures have not always been saturated with vulgarities. And before you click away thinking my argument is one for purity of language within cinema, please don’t… two of my recent films contain the F-word. I’m writing instead to show how much the industry has changed since 1939 when the world first heard the word “damn” from the silver screen.

In the early days of Hollywood there was much more concern and respect for what audiences saw and heard. Filmmakers and studio heads were not quick to alienate the movie-going public. There were a few attempts at codifying some principals and guidelines for filmmakers that culminated in 1930 with the introduction of the Motion Picture Production Code or the Hays Code as some call it, in reference to it’s author William H. Hays.

The Production Code provided a list of Don’ts and Be Carefuls that helped guide filmmakers and the industry from 1934, when it was enforced, to 1968 when the rating system was introduced. Some of the Dont’s on the list included “pointed profanity,” “licentious or suggestive nudity,” and the “ridicule of the clergy,” while some of the Be Carefuls were “the use of firearms,” “sympathy for criminals,” and “man and woman in bed together.” This list obviously speaks to the sensitivities of the general public of the time, but also to the responsibility that filmmakers took, realizing that their films were cultural influencers.

In October of 1939, producer & studio executive, David O. Selznick wrote a letter to the overseer of the production code, Mr. Will Hays. Selznick requested special permission to use the word “damn” in the now immortalized line, “Frankly, my dear, I don’t give a damn” in his film Gone With the Wind. Think about that… a Producer requesting permission to use the D-word! And he did it with such elegance and conviction that only a genius from 1939 could have pulled off (see the full letter below). The film itself would go on to win 10 Academy Awards.

In the letter Selznick tried to convince Hays that this one exception of “damn” wouldn’t lead to more.

“I do not feel that your giving me permission to use “damn” in this one sentence,” Selznick wrote, “will open up the floodgates and allow every gangster picture to be peppered with “damns” from end to end.”

Selznick was right and unfortunately he was wrong. In 1990 Martin Scorsese’s gangster film Goodfellas was not peppered with “damns”, but instead with “fucks”. As Michael Medved pointed out in his book Hollywood vs. America, the 146 minute Goodfellas contained 246 F-words… peppered from end to end.

Do audiences really want more F-words? Medved included a quote in his book by Richard Pine, a respected literary agent in the business, who said, “Nobody ever walked out of a movie and said, ‘Gee, that was a great picture, but the only problem was they didn’t say “Fuck” enough.’ Who thinks like that?”

So how many “F****” are too many? I, personally, would think that perhaps 246 should probably be considered a tad “excessive”. But that’s just me. In 2013, Martin Scorsese would go on to break his own record in his film The Wolf of Wall Street. His new personal best over doubled his previous high with more than 500 uses of the F-word.

My films, on the other hand, pale in comparison. Rebellion of Thought and Stained Glass Rainbows each use the F-word only once and both times it occurs in spontaneous man-on-the-street interviews where I felt it made sense to leave it in the picture based on the context and content. In both cases it gives insight into the characters, the environment, and is not used in a gratuitous manner.

We’ve come long, long way since 1939. I wonder what a Martin Scorsese picture would look like if he would make one under the guidelines of Motion Picture Production Code of 1930. My guess is that he would do a brilliant job with it and that most audiences would not consider it puritan. Today, many filmmakers no longer consider the weight of their role and their responsibility to the movie-going public. And unfortunately, if you complain about it, I’m afraid they might just say, “Frankly, my dear, I don’t give a f***”.

I’ve included Selznick’s letter in its entirety below. It’s well worth the read.

As you probably know. the punch line of Gone With the Wind, the one bit of dialogue which forever establishes the future relationship between Scarlett and Rhett, is, “Frankly, my dear, I don’t give a damn.”

Naturally I am most desirous of keeping this line and, to judge from the reactions of two preview audiences, this line ls remembered, loved, and looked forward to by the millions who have read this new American classic.

Under the code, Joe Breen is unable to give me permission to use this sentence because it contains the word “damn,” a word specifically forbidden by the code.

As you know from my previous work with such pictures as David Copperﬁeld. Little Lord Fauntleroy, A Tale of Two Cities, etc., I have always attempted to live up to the spirit as well as the exact letter of the producer’s code. Therefore. my asking you to review the case, to look at the strip of film in which this forbidden word is contained, is not motivated by a whim. A great deal of the force and drama of Gone With the Wind, a project to which we have given three years of hard work and hard thought, is dependent upon that word.

It is my contention that this word as used in the picture is not an oath or a curse. The worst that could be said against it is that it is a vulgarism, and it is so described in the Oxford English Dictionary. Nor do i feel that in asking you to make an exception in this case, I am asking for the use of a word which Is considered reprehensible by the great majority of American people and institutions. A canvass of the popular magazines shows that even such moral publications as Woman’s Home Companion, Saturday Evening Post, Collier’s and The Atlantic Monthly, use this word freely. i understand the difference, as outlined in the code, between the written word and the word spoken from the screen, but at the same time l think the attitude of these magazines toward “damn” gives an indication that the word itself is not considered abhorrent or shocking to audiences.

I do not feel that your giving me permission to use “damn” in this one sentence will open up the floodgates and allow every gangster picture to be peppered with “damns” from end to end. I do believe, however, that if you were to permit our using this dramatic word in its rightfully dramatic place, in a line that is known and remembered by millions of renders, it would establish a helpful precedent, a precedent which would give to Joe Breen discretionary powers to allow the use of certain harmless oaths and ejaculations whenever. in his opinion, they are not prejudicial to public morals.