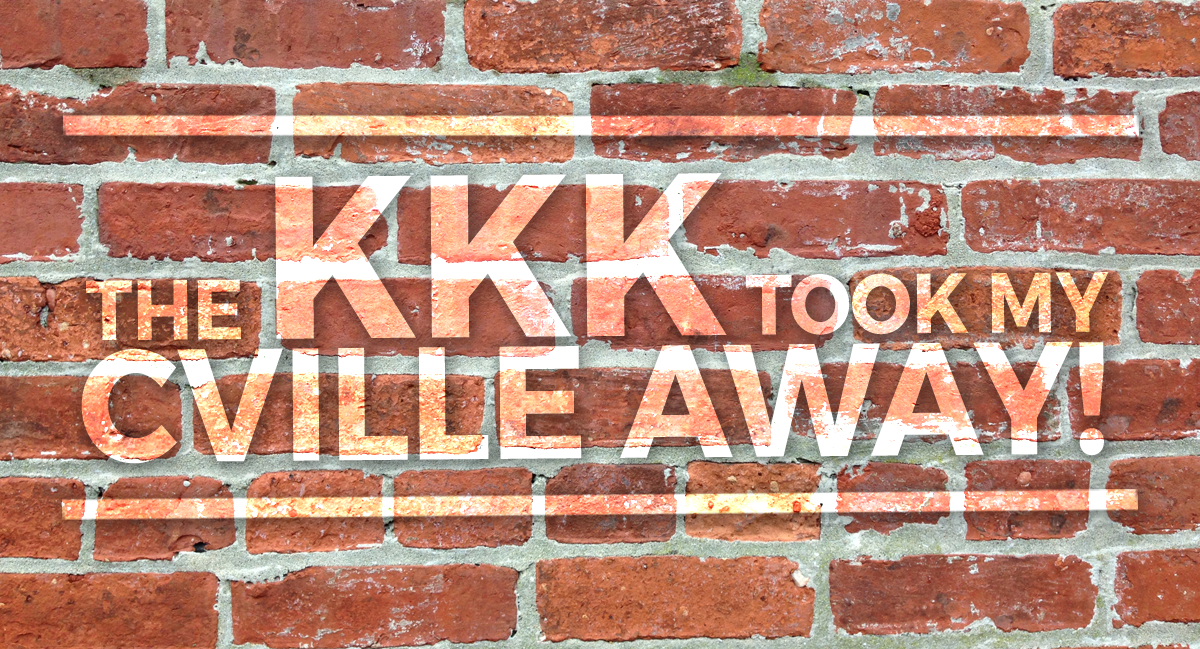 I awoke this morning disappointed… and a little encouraged. Yesterday I attended my first KKK rally right here in my little city of Charlottesville, Virginia. If you’re curious as to why I attended a rally of the Ku Klux Klan you can read my reasoning here. The rally went off as expected. The KKK preached their hate. There was a large police presence. I witnessed several non-Klan arrests and saw 3 pepper grenades deployed to help disperse the crowd afterwards. All in all it was an afternoon of “entertainment”, our town made the national news, nobody was shot or seriously injured, I was documenting the event and captured some great footage… so why do I awake today disappointed?

I’m certainly not disappointed with the members of the KKK. They delivered exactly what they promised… a protest against the removal of confederate statues in Charlottesville. They applied for their permit to demonstrate, it was granted by the city, and the police presence protected them throughout the event. I don’t agree with their message, in fact, I’m staunchly against it, but I love the fact that I live in a country where all speech can be protected by our constitution and our police force—even hate speech. The moment that is taken away, we all have something more serious than the KKK to worry about.

My disappointment did not begin until the KKK showed up about 45 minutes late. Prior to their arrival at Jackson Park (now called Justice Park) the crowd was chanting things like “Black Lives Matter Here” and I found myself proud to live in a town that was willing to stand up to threats and defend the black lives in our community. And then the KKK arrived and the mood shifted drastically. The chants in defense of black lives became curses of white men in robes. The love and support being spoken of our black brothers and sisters turned into group hatred being demonstrated toward the protestors. “F— you, KKK!”, “Go to hell, KKK!” And while the venom continued to build within the counter-protestors, the majority of them never realized that their hatred toward their fellow men and women is not very different at all than the hatred of the KKK. In one sense “hate is hate”. It’s much easier to feel justified in our hate when we are part of a majority that hates the actions or beliefs of a minority, but reality is that hatred is hatred. It eats our souls, consumes us, and eventually spits out our bones.

I was also disappointed with the counter-protestors comments and reaction to the police presence. Printed signs and vocal chants of “Cops and Klan go hand in hand” were seen and heard throughout the park. People yelling at state and city police officers, “Why are you protecting them?”, “Is this how our tax dollars are being spent?”, and “You’re just as bad as the KKK!” were heard through the duration of the rally and afterwards. The negativity toward the police was so bad that I stopped filming for a while and instead walked the entire media moat that separated the crowd from the KKK and told every police officer I saw (probably 30 of them) “Thank you!” for doing their job. I wanted each of them to know that at least someone appreciated what they were doing. And what exactly were they doing? They were not there to protect the KKK (even though they did that as part of their jobs) but they were there to protect the voice of dissent. And for that I am unbelievably grateful. The police presence alone probably cost the city $100,000 or more. And as I stood there watching the Ku Klux Klan spread their venom, I thought to myself, “Thank God I live in a country that allows these voices I disagree with to be heard” and “Thank God we pay our police to help make this type of event safer for everyone.”

So this is our America; a place where haters can apply for a demonstration permit and have it granted, a place where counter-protestors can believe their hatred is more “pure”, “just”, “moral”, or “righteous” than the other guy’s hatred, and a place where police officers will get up in the morning to do their job to the best of their abilities all while hoping they’ll get to come home that night and tuck their kids into bed. I won’t soon forget talking to a black, female police officer at the rally yesterday. I thanked her for doing her job and mentioned something about this having to be one of the craziest days for her on the force. Her sigh, head nod, and the look in her eye told me I was 100% right.